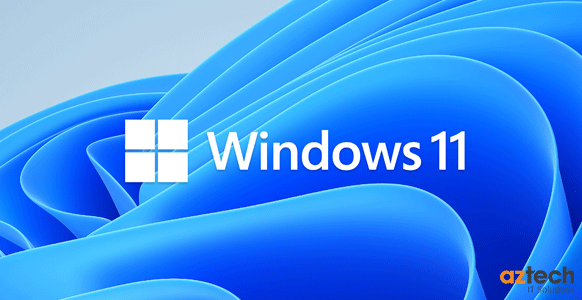 Last week Microsoft officially announced the well awaited Windows 11 update. After months of rumours and leaked content, we can finally confirm what’s new in Windows 11. However, the announcement hasn’t come without some confusion.

Windows 11 is full of new and exciting things and is currently downloadable in a ‘preview phase’. It is not yet confirmed when this year it will be officially launched, however, here are some of the big changes you can expect to see in the new update.

As mentioned in our latest Windows blog, Windows 11 will feature a centre-aligned taskbar. For Mac users, this won’t seem that pivotal, however, for Microsoft enthusiasts, this is pretty crazy. Microsoft’s Panos Panay said, “We put Start at the centre – it puts you at the centre”.

Not to panic though, in settings you can change your taskbar back to be left-aligned.

Another new feature of Windows 11 is the simplified starter menu. Gone with live tiles, and replaced by app icons, recently opened, and frequently used files. Due to Microsoft 365, files you have frequently opened on other devices will also appear here.

Furthermore, Windows 11 will bring a more agile multi-window feature. Similarly, to a Mac, Windows has introduced an easier way to access and organise multiple desktops and monitors. Additionally, snap layouts, a feature for easily arranging apps on your screen has also been improved. This is all due to Microsoft putting more focus on enabling productivity amongst users.

Windows 11 will also feature faster updates, claiming that most updates will be 40% smaller, and will happen in the background. There will still be larger updates, that cause disruption however, these will be reduced to once a year.

Aesthetically there are many changes, all creating a sleeker, and more user-centric experience, however, arguably the biggest change Microsoft is introducing is a pretty controversial one. Windows 11 will require Intel 8th gen Coffee Lake or Zen 2 CPUs and up, 4GB of RAM and 64GB of storage. This will ultimately leave behind millions of PCs that were bought and sold during the previous Windows launch – Windows 10. This is pretty unusual for Microsoft, as both Windows 8 and Windows 10 only needed a 1GHz processor, 1GB of RAM and 16GB of storage. With expectations of Microsoft users high, as it was announced that the Windows 11 upgrade would be free to those who already have windows 10, we can understand why many customers of Microsoft are disappointed to find that at the end of the day, they may not be able to access this new upgrade after all.

After a lot of backlash, Microsoft tried to explain the reasoning for the new hardware requirements, which has ultimately come down to security. Microsoft is aiming to enable a more up-to-date BIOS (basic input/output system) that supports features such as Secure Boot and TPM 2.0 (trusted platform module). TPM chips, device encryption, HVCI (hypervisor-protected code integrity) and Secure Boot “has shown to reduce malware by 60 per cent” Windows claim. However, to support all of these protections, you need modern hardware.

It is understandable why Microsoft decided to put more of a focus on security with this launch, as Microsoft’s operating system is known to have pitfalls when coming to protecting itself against Ransomware and Malware attacks.

Windows 11, is, however, available to download during its ‘preview phase’, appropriate hardware not necessary. Nevertheless, it is still not confirmed when Windows 11 will be fully launched, and which devices will support it.